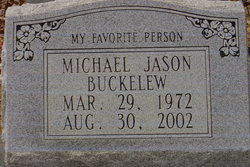 On August 25, 2002, at approximately 2:00 am the suspect(s) enter the residence and fatally shot Michael and Enedelia. The killings mystified Edinburg Police Department investigators and who have no clues who committed the murders of Jason Buckelew and his common-law wife, Enedelia Benavidez, 26, who were from Houston, Texas. They both were shot in the head located at 6315 Gold Street in Edinburg, Texas. Jason died shortly after at the Valley Baptist Medical Center in Harlingen, Texas and she died in San Antonio Texas Hospital. There was a third victim, Esmeralda Reyes, 26, who survived and remained in critical condition at the San Antonio hospital with a gunshot wound to the head. BENAVIDES and BUCKELEW were deaf and mute. This case remains unsolved. No Justice. No Peace.