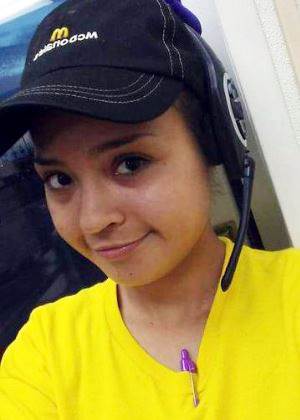 On July 16, 2017, Nahomi Rodriguez, a 19-year old, went missing from McDonald’s in Harlingen, Texas. She was last seen alive entering a light colored early 2000s Ford Escape on surveillance video outside her work at a McDonald’s in Harlingen in July 2016. About one year later her skeletal remains were found in Rio Hondo in April 2017. Investigators believe that the same person and vehicle are captured on video from a camera inside the fast food restaurant. A man in a white cap with a black shirt pulls up to the drive-through window. Nahomi can be seen giving the unknown man a fist-punch. The Harlingen police department, law enforcement partners, and community partners are offering $25,000 for information leading to the arrest and conviction of the person or persons responsible for Naomi's disappearance and death.